In this panel you’ll be able to set the parameters to improve your farms performance and your virtual service custom features. The Edit Farm Action properties depend on the profile type that we’ve selected while the farm is created.

The DATALINK farm profile allows to create a routes based farm where the backends are uplink routers or gateways. This kind of farm profile is ready to share several uplink WAN router accesses using the load balancer as an uplink channel multiplexer (1 input and several router line outputs). Therefore, the DATALINK farms could be used as high available communication links and additionally could be used as bandwidth increase joining the amount of bandwidth between the routers backends links. 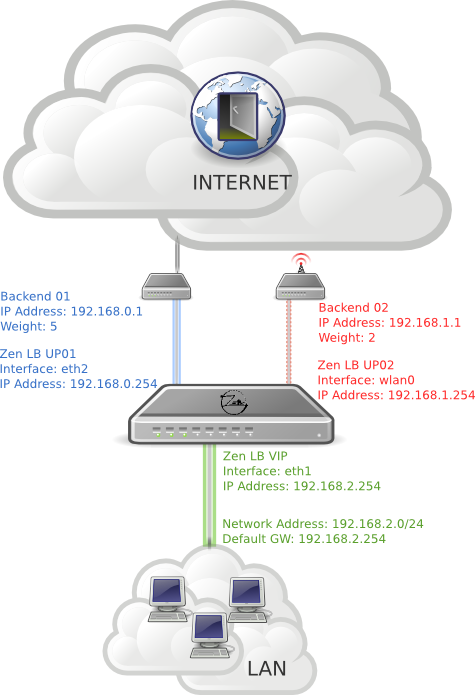 The DATALINK farm profile provides a distribution panel with the following parameters:

Farm’s name. It’s the identification field and a description for the virtual service. In order to change this item you’ve to modify the name field and press the Modify button. The load balancing service will be restarted automatically after applying this operation. Ensure that the new farm name is available, in another case an error message will appear.

Farm Virtual IP and Interface. These are the virtual IP address and network interface associated in which the virtual service for the farm will be bound and listening in the load balancer system. To make changes in these fields, ensure that the new virtual IP and network interface are not in use, as it will be exclusivity for this task. In order to apply the changes the farm service will be restarted automatically.

Load Balance Algorithm. This field specifies the load balancing algorithm to be used in order to determine the backend router. By default, weight algorithm will be the default selected algorithm.

Weight: connection linear dispatching by weight. Balance connections depending on the weight value, you have to edit this value for each real server. The requests are delivered through an algorithm to calculate the load of every server using the actual connections to them, and then to apply a linear weight assignation.
Priority: connections always to the most prio available. Balance all connections to the same highest priority server. If the first server is down, the connections will switch to the next prioritiest server. With this algorithm you can build an active-pasive cluster service with the real servers.

In order to get more specific information regarding this kind of farms, please refer to the official ZenLB documentation named “Quick Start Guide for uplinks load balancing with Zen Load Balancer”.

With a DATALINK farm profile you’ll be able to configure the following real servers properties:

With the Save Real Server button you’ll apply the new configuration, or you’ll be able to cancel the process.

Once the real server configuration is entered, you’ll be able to edit the config throught the Edit button or delete the configuration with the Delete Real Server button.

The server index is useful to identify the real server configuration for the current farm.

This action shows the actual state of backends, clients and connections that are being delivered from the virtual service to the real servers.

Refresh stats option will allow to refresh the status view every 10, 30, 60 or 120 seconds. It must be used with caution as this feature could overload the load balancer.

The Real Server Status table shows the state of every backend: