Routing is a mechanism where there is a selection of a path for traffic in a network, where a packet is analyzed in source and destination and managed by a specific packet forwarding mechanism, or the same, the management from one network interface (ingress) to another (egress).

Routing implementation can be done from different devices like switches, firewalls, servers, load balancers, really any device that is able to receive/send packets, for that, ZEVENET does an advanced routing implementation super-efficient and effective adding options to be configured as customized if required, but how a simple routing system works and how ZEVENET Routing implements it and how to use the advanced features?

But what happens if more advanced behavior is required? For example, how to send the packet to different gateways based on the source address, or even forward the packet coming to the same network-based in complex algorithms or based in a marking packet system, so it is here where the ZEVENET implementation is taking place working in the following way.

The following diagram explains how a simple routing system takes the decision for packet forwarding: 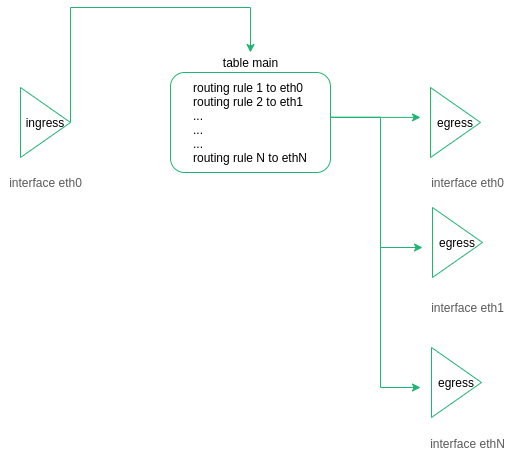 The packet ingresses in the device through eth0 and the routing table checks the packet destination, now the packet will be sent to a given interface to be egressed. This way of working is simple and useful.

As we already indicated the ZEVENET ADC appliance includes an advanced routing system, where first the packet is “rulerized” to be decided secondly to which table forward to it: 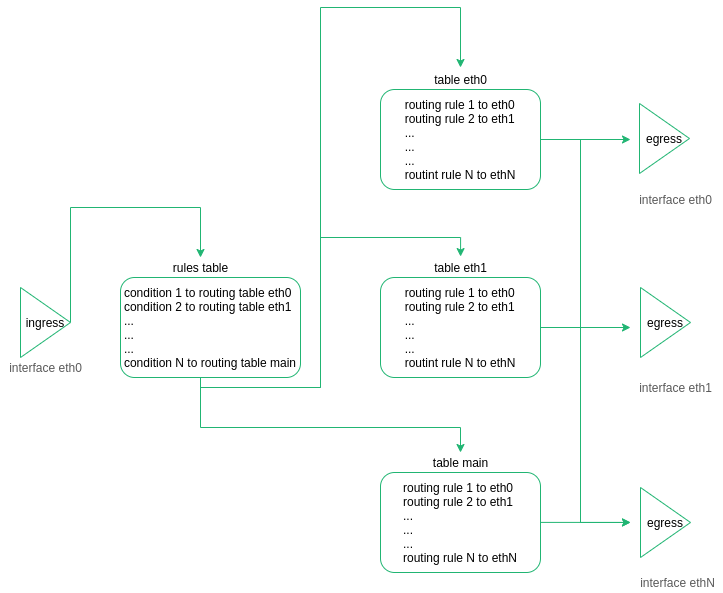 The routing module of ZEVENET ADC was designed with the following idea:

Each network interface (NICs, VLANs or Bonding) manages its own Routing table and gateway.
The traffic reaching a VIP will be managed by the same routing table for incoming traffic (from client to load balancer) than for outgoing traffic (from the load balancer to backend)
Each packet reaching a farm is marked so this mark is taken into account to redirect the packet to the next hop.
To keep a routing system simple with a minimum number of static routes because the static routes would increase adding more Interfaces.
In case that the ADC requires to connect to external systems, navigation proxy, DNS, hot fixes review, etc, a dedicated table will be used (table main).
Load Balanced traffic will use different tables than the main, to separate and isolate different kinds of traffic.

The following lines describe a real scenario, a ZEVENET ADC is configured with two NICs (eth0 and eth1).

This information can be shown with the command:

The L4XNAT farm inside the LSLB module (Local Service Load Balancing) gives a unique mark identifier to each backend in each farm, so as soon as a packet reaches the VIP 192.168.101.11 in the Virtual port 80 configured in the eth1 the load balancing module assigns a mark to the packet just to identify the new destination, in the following step, the rule system checks the mark in the packet, based in this mark the routing system know to which route table the packet needs to be sent.

For example, the l4xnat farm marks a packet with the value 201, which identifies the backend 192.200.20 in the farm configured in Virtual IP 192.168.200.20 and virtual port 80, now the rule table is able to forward the packet to the corresponding route table:

The routing rules can be listed with the command:

As it is shown in the ID 25998 all the traffic marked with mark 201 will be forwarded to table table_eth1, let check the content of table eth1:

With this mechanism First the System marks packets to identify the destination and later the advanced Routing system is able to forward the packet in a proper way to confirm it will reach the correct destination.